And we’re off! My workshop has officially started. I already feel like I’m almost a real writer: my idea mill is pumping out some interesting nuggets, I’m attempting to stick to a weekly work schedule, and I can effortlessly vacillate from complete confidence to garment-rending despair in a matter of minutes. In these latter times I find myself asking the big questions, like: Am I smart enough to do this? What if I can’t make this work? Is this what I really want? Who can I pay to make me dinner?

Ah, the romance of it all. As it turns out, one of these questions is actually applicable to novel writing, and it’s not the one about dinner. The task I’m working on at the moment is identifying what exactly my main character wants.

This is important, because the MC’s chief desire is what drives a book. It’s what draws you into the story as a reader. It’s what makes you care about and identify with what happens in the plot.

Let’s call the main character Ronald. If Ronald doesn’t deeply desire anything enough to try to get that thing (or person, or situation), who cares what he does or what happens to him in the story? But if what Ronald wants more than anything in the world is to eat a hamburger, that immediately spurs interest. It brings up questions, like why does he want a hamburger? Why hasn’t he already eaten a hamburger? What have his experiences been that have driven him to such hamburger longing? Will he get his hamburger by the end of the book, or will he be disappointed? OR will he discover that he’s been a vegetarian ALL ALONG? 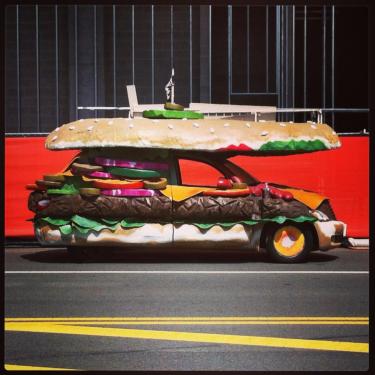 So yes, Ronald wants a hamburger, but what he really wants is to feel full. His need to feel full is what makes him want a hamburger. This two-part desire is what compels the story.

Or maybe what Ronald wants is the PERFECT HAMBURGER. And his abstract desire is perfection.

Or maybe he wants to open a hamburger restaurant and turn it into a hamburger empire, but he really just wants his father’s approval (his father, of course, being a bit of a hamburger connoisseur himself who only ever showed his love for his son by serving him expertly-crafted meat patties).

As a disclaimer, my novel is not about a man named Ronald who wants a hamburger.

But now I know what I’m having for dinner.

© Novel Excuses, 2015 to present. Unauthorized use and/or duplication of this material, including text and images, without express and written permission from this site’s author and/or owner is strictly prohibited. Excerpts and links may be used, provided that full and clear credit is given to Novel Excuses with appropriate and specific direction to the original content.